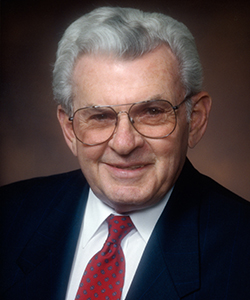 Warren Knight was born in Charleston, West Virginia on October 16, 1929. He graduated from the University of Virginia in 1952 and University of Virginia School of Law in 1955. He joined the Marine Corps in 1955 and was stationed in California until his discharge four years later. He practiced law in Orange County until he was appointed to the Orange County Municipal Court, where he served from 1971-1973. He served on the Orange County Superior Court from 1973-1979 and was named Trial Judge of the Year by the Orange County Trial Lawyers Association in 1974 and 1978. In recent years, he was the recipient of numerous other awards from the legal community, including the D’Alemberte-Raven Award from the American Bar Association, the Lifetime Achievement Award from the American College of Civil Trial Mediators and the Founders Award from the Association of Media and Entertainment Counsel.

Judge Knight’s experience in the courtroom, where civil cases could take as long as five years to get to trial, inspired him to leave the security of a judgeship in 1979 and open a one-man mediation practice in Santa Ana, CA. Thus was the beginning of the first JAMS office and Judge Knight’s extraordinary contributions to the field of alternative dispute resolution (ADR).

At that time, arbitration and mediation were rarely chosen voluntarily by attorneys, but Judge Knight believed he could convince them to embrace private dispute resolution as a quicker and more efficient process. Changing the legal culture was an uphill battle, but Judge Knight, encouraged by his wife Carolyn and his friend and then Appellate Court Justice Jack Trotter, was not deterred. His reputation as a fair and thoughtful judge, coupled with his warmth and unbridled enthusiasm for ADR, soon brought lawyers to the mediation table. As business increased, fellow judges and attorneys joined JAMS as mediators and arbitrators in locations throughout California. Thirty years later, JAMS has grown to be the world’s largest private ADR provider with hearing locations across the globe.

“Judge Knight was a visionary,” said JAMS neutral Justice Trotter. “He saw a better way for lawyers to do business and he never stopped believing it.” Indeed, Judge Knight will be remembered by his friends and colleagues as a down-to-earth mentor who was incredibly generous with his time, a teacher who never missed an opportunity to learn something new himself. Judge Knight possessed the ideal disposition for a mediator: a comforting presence, superior listening skills, a sharply honed sense of justice, and an infectious sense of humor. His lifelong commitment to conflict resolution has inspired new generations of lawyers to view ADR as both essential and commonplace. Judge Knight’s legacy lives on in two of his proudest achievements: the JAMS Foundation, which provides grants to nonprofits in the dispute resolution field; and the JAMS Society, in which JAMS associates perform thousands of hours of pro bono activity each year for numerous causes.

Judge Knight’s family and loved ones would agree that he lived life to its fullest. He spent 10 years of his “semi-retirement” in Sun Valley, Idaho, where he enjoyed fly fishing, hiking and making new friends. He was passionate about travel and loved planning new adventures for him and Carolyn. More recently, he lived in California, where he worked on his family genealogy for many years and had just completed a book for his children. He also became a mentor in the Newport/Mesa ProLiteracy Program at the Newport Beach Public Library, where he mentored two students.

THANK YOU!
Your case information has been submitted and a JAMS professional will respond shortly.
CLOSE THIS WINDOW