BEVERLY HILLS – JAMS, the largest private provider of mediation and arbitration services worldwide, is proud to announce that Hon. Carlos R. Moreno (Ret.) will be presented with the Constitutional Rights Foundation’s Bill of Rights Award tonight at the organization’s 2017 Spring Dinner at The Beverly Hilton Hotel. The award is given annually to an individual who has served as a role model of social responsibility for youth in the U.S.

Justice Moreno, who joined JAMS earlier this year and is based in the Los Angeles Resolution Center, served on the California Supreme Court from 2001 until 2011, writing more than 140 majority opinions on a wide range of precedent-setting civil and criminal cases.

A first-generation Mexican- American, Justice Moreno also served as U.S. Ambassador to Belize from 2014-2017, where he worked to improve citizen security for Belize and the region, emphasizing citizen protection, economic development and good governance.

I am honored to be recognized by a group whose purpose is to nurture students into becoming informed and engaged citizens by teaching them about their rights and responsibilities within our democracy and the ideals expressed in the Constitution.

Constitutional Rights Foundation (CRF) seeks to instill in our nation’s youth a deeper understanding of citizenship through values expressed in the constitution and the bill of rights and to educate young people to become active and responsible participants in our society.

His life-long commitment to advancing the rule of law and public service makes Justice Carlos Moreno an exemplary role model for our nation’s youth. Constitutional Rights Foundation is honored to present him with our Bill of Rights Award. 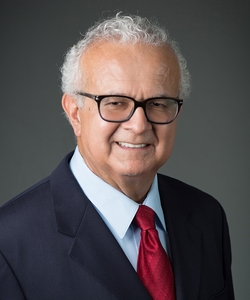