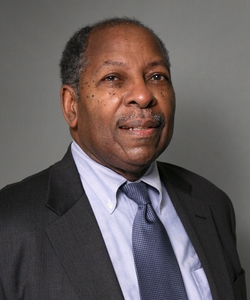 One of JAMS most respected neutrals, Hon. George Bundy Smith (Ret.) passed away on August 5, 2017. He joined JAMS in 2011 after serving for more than 30 years in the New York State Court System. For the last 14 of those years, he was a New York State Court of Appeals judge, the state’s highest court.

His entire life was committed to the pursuit of justice, seeking to assure fairness, inclusiveness and equal opportunity.

While a law student at Yale, William Sloane Coffin, Yale University’s chaplain and a man active in the Civil Rights Movement, invited him to travel to Montgomery, Alabama as a Freedom Rider. Judge Smith accepted, even though it was just two weeks before he was scheduled to take his law school exams. He and his fellow riders were then arrested for sitting at a whites-only lunch counter. He missed his exams and was convicted of breach of the peace, but the U.S. Supreme Court later reversed the conviction.

Everyone at JAMS, as well as his many friends and colleagues in the legal community, will greatly miss him.

In lieu of flowers, donations in the memory of Judge Bundy Smith may be made to Phillips Academy Andover.