LOS ANGELES – JAMS, the largest private provider of mediation and arbitration services worldwide, today announced the addition of Hon. Jay C. Gandhi (Ret.) to its panel.  Judge Gandhi will be based in the Los Angeles Resolution Center.  He will serve as a mediator, arbitrator, special master, and case evaluator in a variety of practice areas, including Business/Commercial, Class Action/Mass Torts, Financial Markets, Intellectual Property, Employment, Entertainment and Sports, Health Care, and Insurance.

Judge Gandhi comes to JAMS after eight years of distinguished service as a U.S. Magistrate Judge for the Central District of California.  Judge Gandhi was a highly sought-after settlement judge, and hailed by colleagues and counsel as a “closer.”  Judge Gandhi strategically and tirelessly brokered deals in seemingly intractable disputes, often where prior settlement attempts were unsuccessful.  Judge Gandhi was also an active, hands-on trial judge who presided over a broad range of contentious and complicated civil cases.

Before his appointment to the federal bench, Judge Gandhi was a partner at Paul Hastings LLP.  Judge Gandhi spent 12 years litigating high-profile, high-dollar commercial cases and MDL/class actions in a variety of state and federal jurisdictions across the country.

Judge Gandhi is well known for his exceptional mediation skills, and his track record of settled cases is impressive. His diligence, sophistication, and ‘call it as you see it’ attitude is a winning formula for resolving cases, and we are privileged to have him on our roster.

ADR is my passion, and was from day one – both in the courtroom and in practice.  There is not only satisfaction, but fulfillment that comes from creatively tackling conflict and forging a peaceful resolution. As the preeminent provider of ADR services, I’m excited to work alongside JAMS’ excellent panelists.

Judge Gandhi received his B.A., with honors, in Business Administration (Marketing) and Philosophy from California State University, Fullerton.  He received his J.D. from the University of Southern California Gould School of Law, where he was elected to the Order of the Coif.  Following graduation, Judge Gandhi clerked for the Hon. Kenneth M. Hoyt, U.S. District Court, Southern District of Texas, Houston Division.

About JAMS
Founded in 1979, JAMS is the largest private provider of mediation and arbitration services worldwide. With Resolution Centers nationwide and abroad, JAMS and its more than 350 neutrals are responsible for resolving thousands of the world’s important cases. JAMS may be reached at 800-352-5267. 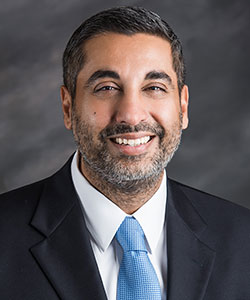