New York, NY – JAMS, the largest private provider of mediation and arbitration services in the United States today announced the addition to its panel of Kenneth M. Kramer, Esq.  Based in the JAMS New York Resolution Center, he will mediate and arbitrate complex commercial, antitrust, class actions, international and securities disputes.

Mr. Kramer joins JAMS after 37 years in private practice, formerly serving as a partner and Co-Chair of the Litigation Department for Shearman & Sterling LLP in New York where he built a robust commercial litigation practice and was instrumental in the negotiation of dozens of settlements.

“Mr. Kramer has substantial commercial litigation and negotiation experience in the financial services industry, including complex matters such as antitrust actions and securities class actions,” said Chris Poole, President and CEO of JAMS.   “The JAMS Financial Markets Group has expanded significantly over the past year to handle the growth of cases in this area and his skills will be greatly beneficial to attorneys in these matters.”

Mr. Kramer said: “JAMS provides a high-quality platform for the resolution of financial services disputes. JAMS’ three decades of expertise in class and mass action resolution, including in the securities and antitrust areas, is unmatched in the ADR community.”

In addition to being Co-Chairman of Shearman & Sterling’s Litigation Department, Mr. Kramer was also a Member of its Practice Committee.  Mr. Kramer was a resident partner in Shearman & Sterling’s Paris office from 1979 to 1981, during which time he was a conseil juridique in the French Bar.  He is fluent in French and competent in Spanish and Italian.

Prior to joining Shearman as an associate in 1977, Mr. Kramer was an associate with Cravath, Swaine & Moore from 1973-1976.  He began his legal career as a Law Clerk for the Honorable Orrin G. Judd, United States District Judge for the Eastern District of New York. Mr. Kramer also served as a Lieutenant in the United States Naval Reserve from 1966-1969.

Mr. Kramer has been recognized as a New York Super Lawyer annually since 2006. He is also recognized as a leading antitrust lawyer in New York by Chambers USA, America’s Leading Lawyers for Business, and is listed in Who’s Who of American Lawyers.  He serves as president of the board of Episcopal Social Services, chair of the board of Music for Life International, and board member of International House.  In the past, Mr. Kramer has served on the boards of New York Lawyers for the Public Interest, The Legal Aid Society and Juvenile Diabetes Research Foundation.

Mr. Kramer earned his J.D. in 1972 from Albany Law School of Union University in New York where he served as Editor-in-Chief of the Law Review.  He received his A.B. from Colgate University in 1965. 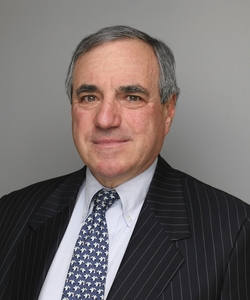